The CRF functions of a RGB-D sensor can be calibrated using CRF calibration tools provided in github.

To illustrate the calibration procedure, a sample sequence of the multiple exposure image is available from here. Sample images are shown as below:

At each exposure, we take 30 individual frames, and their file names are arranged as:

This is because the exposure control of Xtion sensor can be inaccurate. We manually remove the frames whose brightness are inconsistent with the majority of frames taken at the specific exposure time.

After that, the remaining images are fed into  the tool “calc_crf” for estimation. Its derivate, inverse CRF and pixel noise function are then calibrated using the matlab tool “crf_calibration_matlab”.

The synthetic dataset is constructed for evaluating the tracking performance of the proposed method under simulated exposure changes. It is based on ICL-NUIM dataset.

Two sequences of synthetic dataset,”smooth” (top) and “flicker“, were created. “smooth” is aimed at simulating the smooth adjusting of exposure and “flicker” the flickering artifacts caused by sudden changes of exposure.  In both sequences, the synthetic RGB and depth noise are added.

“smooth” (top) and “flicker” (bottom) can be downloaded by clicking at them. The noise free version as well as a noisy version and the ground truth poses are packed together in zip files. The naming convention of RGB-D frames are shown in the following: 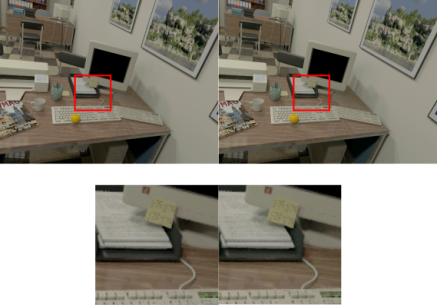 In a “.pos.txt” file, a camera pose is represented in the following format:

The HDR texture captured using these sequences are shown in the accompanying video.